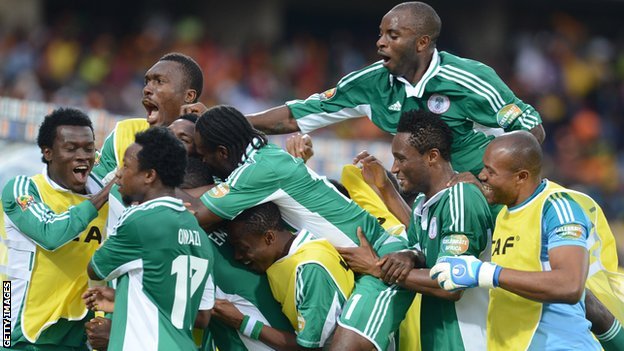 The Circus is a second home to Elephants, but the Super Eagles of Nigeria did not hesitate to send the Ivorian 'Elephants' out of the African Cup of Nations Circus.
Although the super eagles were labelled as underdogs and referred to as 'Super Chickens' by Emmanuel Eboue, they stole the show with the first goal of the match by Emmanuel Emenike went straight past the Ivorian keeper like a lightning strike at 43 minutes. Drogba cheated his way to get a free kick which allowed Tiote to score an equaliser (his first international goal) 5 minutes into the second half. It was hard to break the deadlock, but a super strike by Sunday Mba at the 78th minute turned the match around and sealed the Super Eagle's victory. The performance and resistance showed by the proud Nigerian Super Eagles made the encounter a 'Super Sunday' match. The competition favourite failed to deliver yet again as they crashed out of the competition at the quarter final stage, coming short of their performance last year when they reached the final and only lost to the current champion, Zambia by penalty shootout.
Posted by CreatedbyKelz at 17:40

140 pages of Poetry and stories that touch is now available for your reading pleasure. Please click on your desired format and distri...