Spectre : 50 + Years of James Bond Movies in One Poem 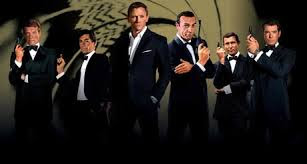 Dr. No is a special guy that came From Russia with Love,
He had a Goldfinger and a Thunderball.
Unlike Drake, YOLO was not his motto,
As he believed You Only Live Twice.
He was On Her Majesty’s Secret Service,
There he realised Diamonds Are Forever.
He had to Live and Let Die,
Not even The Man with Golden Gun could stop him.
The Dr was in love with The Spy Who Loved Me,
Until he was pushed off the Moonraker.
He wrote a letter to the spy titled For Your eyes Only,
After which he met the beautiful Octopussy.
Dr. No had A View to a Kill in The Living Daylights,
A Licence to Kill and a GoldenEye.

To him, Tomorrow Never Dies,
And The World Is Not Enough.
Dr No. can always Die Another Day,
As long as he plays ‘Texas hold’em’ at the Casino Royale.
The Quantum of Solace gave him the happiness he was after,
Until he arrived at Skyfall.
Although the sky fell on him,
nothing will stop him from Infiltrating the Spectre.
Dr. No's name is James....
James Bond!

The Africa That Never Was African (Written by Cynthia Nakanjako)

The wave of independence across Africa in the twentieth century was once heralded as one of the greatest liberating movements in African history. Many swear colonialism is a thing of the past. Yet the reality today paints a somewhat different picture. 54 countries in the African continent, but you can count on one hand how many of these have a native "African" language as an official language. Colonialism is alive and still dictates today.
With the colonial era came the fallacious idea that portrayed the West as the superior know-how and Africans as the representatives of an inferior culture. This is very misleading considering that by the 19th century the African landscape had advanced to surpass their economic and political systems.
Indeed Pre-colonial Africa had prosperous political systems in the form of autonomous States and groups. African economies were advanced in every area particularly the area of trade long before colonial rule. By the 14th century, the legendary city of Timbuktu was one of the greatest academic and commercial centres in the world due to trade in salt, gold and ivory. Under the Songhai empire, Timbuktu was also a great Muslim centre with Qur'anic schools and a university centred at the Sankore mosque. Thousands of students all over the world came to study here.
Exploitation, suppression and economic enslavement - these are terms that have their roots in colonialism and still continue to survive as weapons of domination in today’s Africa.
Today, Western powers are not taking over countries as in the 19th century but the insidious influence of Western armies, finance and culture demonstrates that colonialism still exits albeit in another form. In fact what we have is neo-colonialism. Such that in theory the countries are independent but in actuality their economic systems and political policies are directed from outside - This is the new face of colonialism experienced in Africa.
It is no secret that Africa is home to some of the world’s most precious minerals including diamonds, gold, coltan and uranium - but as long as the miners have no say; as long as most mines are in the hands of the private sector majority of which are foreign companies, the sole beneficiaries remain the West. While the miners become like dogs waiting to feed on the crumbs that fall from the master’s table.
In the 19th century, the economic goals of colonialism were simple: to provide maximum economic benefits to the colonial powers at the lowest price possible. How much has changed since? Not much . The West are still fronting "trade" "democracy" "human rights" but behind the scenes they are exploiting Africa for oil and other natural resources just like in the colonial rule era. It is the countries that they "helped" or are "helping" that suffer so badly.
Oil- rich Libya is now famed for political unrest and battles. Once upon a time, the lucrative oil industry had turned Libya into Africa's wealthiest country. Libya had the highest GDP per capita and life expectancy on the continent. In fact less people lived below the poverty line than in the Netherlands. That was all until the West decided to intervene and control the oil. Hiding behind the veil of "democracy" they branded Gaddafi a tyrant and then killed him. As of now, the democracy and freedoms promised by the West, are yet to fully arrive, and may never do so.
Libya is literally on its knees, it is now no more than a radical Islamist's playground, its economy is in shambles. But ever since chaos erupted in Libya those who financed Gaddafi’s ouster chose to instead turn a blind eye; and play hide and seek to the massive exodus of refugees which has turned into a crisis on their door step.
Moreover, most major European countries today have gold as their reserve- massive reserves of gold which have a very expensive price tag. But can you show me at least one gold mine in any of these countries. Can you name one net exporter of gold ore in any of these countries? How ironic that the countries they buy this gold from remain poor?
Somewhere along the way Africa is being short changed.
And God forbid all African nations come together as one to fight imperialism and build one stable economy, because then the real losers will be the West. Where will they go to get these natural resources at the exploitive prices they enjoy now? This is why Pan-Africanism is a threat to Western interests in Africa and the imperialists are ready to fight tooth and nail to combat the movement. Colonel Muammar Gaddafi was one of Africa's surviving Pan Africanists. He had a road map to Africa’s unity and prosperity of which he was willing to finance. But of course this did not augur well with the Western powers so something had to give. The soft option was to get rid of Gaddafi and maintain their exploitative tendencies.
When you look at the continent’s railway systems. They all go from a coastal port inland to a mine. They were not built to link peoples or towns or regions, they were designed to extract Africa’s mineral wealth as quickly and cheaply as possible and ship it overseas. The "colonial map that made little sense" drawn in Europe by Europeans, is still the basis for the political map of Africa today. Africa played no part in the creation of their national states and despite being home to at least 2000 languages, you can count on one hand how many of the 54 national states have a native "African" language as an official language.

"Children go to school without any learning aids. Taught in a language which is not theirs..."  Nelson Mandela during his speech at the London School of Economics, 2000.

Colonialism long existed in Africa but it is the Berlin Conference of 1884-85 that fully legitimised it. At the conference, Britain, France, Italy, Germany, Belgium, Spain and Portugal convened to negotiate their territorial claims in Africa and establish their colonial borders, hence the term Scramble for Africa. Africa was literally carved up without regard for pre-existing linguistic and political boundaries. This not only perpetuated ethnic tensions where they did not previously exist, but it also introduced a cultural dichotomy detrimental to the native inhabitants. The new inherited national states often had little in common with traditional boundaries based on ethnicity, language, religion or natural features. This created border disputes and underpinned many African conflicts such as those between Tutsis and Hutus, Ethiopia and Eritrea, Somalia and ‘Somaliland’, and North and South Sudan.
Yet half a century later, Africans were given flags and national anthems, airlines and armies and told they were “independent,” but the countries created and the systems that the Europeans imposed on Africa as they left were not rooted in African culture or experiences. And they were certainly not strong enough to contain social and ethnic pressure that lay immediately beneath the surface.  As much as slave trade, colonialism destroyed Africa. Its resources, lands, people, and cultures were expropriated. Colonialism meant the development and enrichment of the West at Africa’s expense; a crime of enormous proportion that can never justified. Millions died.
“In the mid-20th century, more than 3 million people were killed in the construction of the Brazzaville-Ocean Railway by France. The creation of such infrastructure, which connected Africa’s raw materials to points of export to Europe, was described as giving Africa the benefits of “Western civilisation.” The same process continues today and is now called “development.”
The multi-sided war that has killed more than 6 million people in the Democratic Republic of Congo since 1998 is not simply the result of tribal animosities but the country's wealth in coltan. The war was coincided with the information technology boom that has caused a huge demand for coltan - the mineral used in electronic gadgets such as mobile phones, computers and iPods. Congo possesses 80 percent of the world's coltan.”
Ultimately, independence officially restored power in Africa to Africans but Western influence remains strong. And while Africa is often presented as “chaotic” there is always a comprehensible explanation. Despite its corrupt leaders and their poor management of resources, most of this chaos is created by outsiders to serve their capitalistic greed. Africa remains a victim of a neo-colonialist conspiracy to keep it poor, a continuation of imperialism and exploitation that dates back to the slave trade.
Posted by CreatedbyKelz at 17:22 No comments:

The Great Wall of China

A Chinese saying goes that: 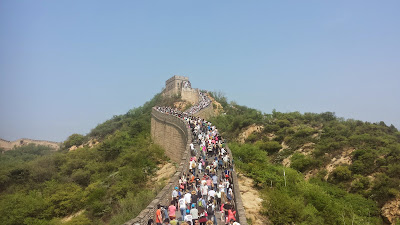 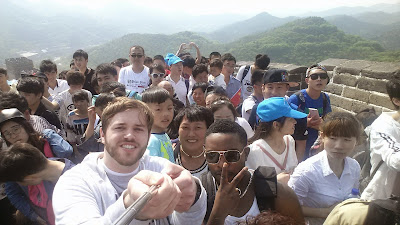 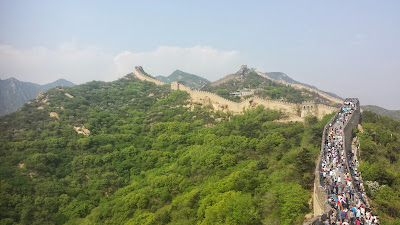 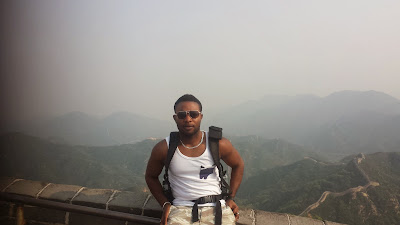 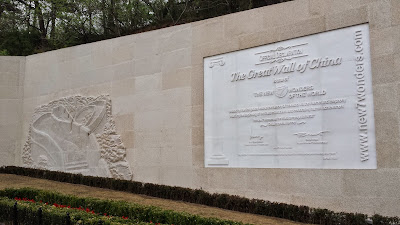 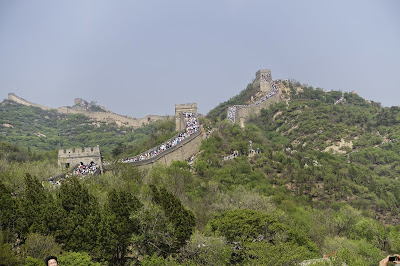 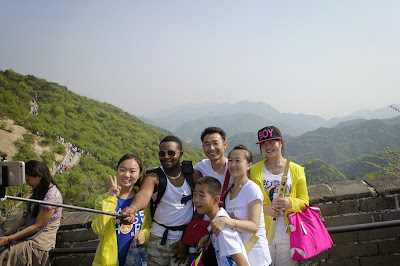 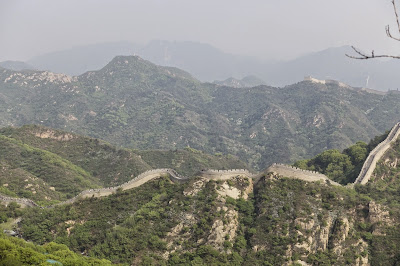 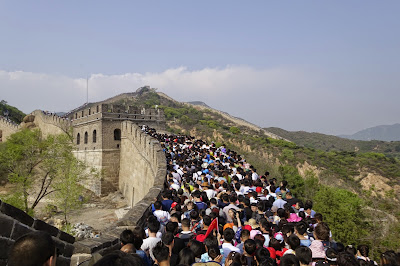 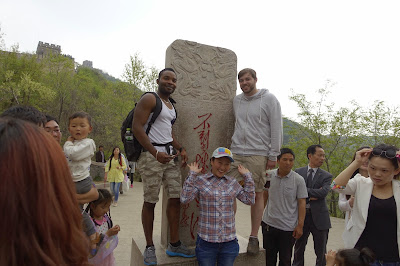 Posted by CreatedbyKelz at 14:52 No comments:

140 pages of Poetry and stories that touch is now available for your reading pleasure. Please click on your desired format and distri...